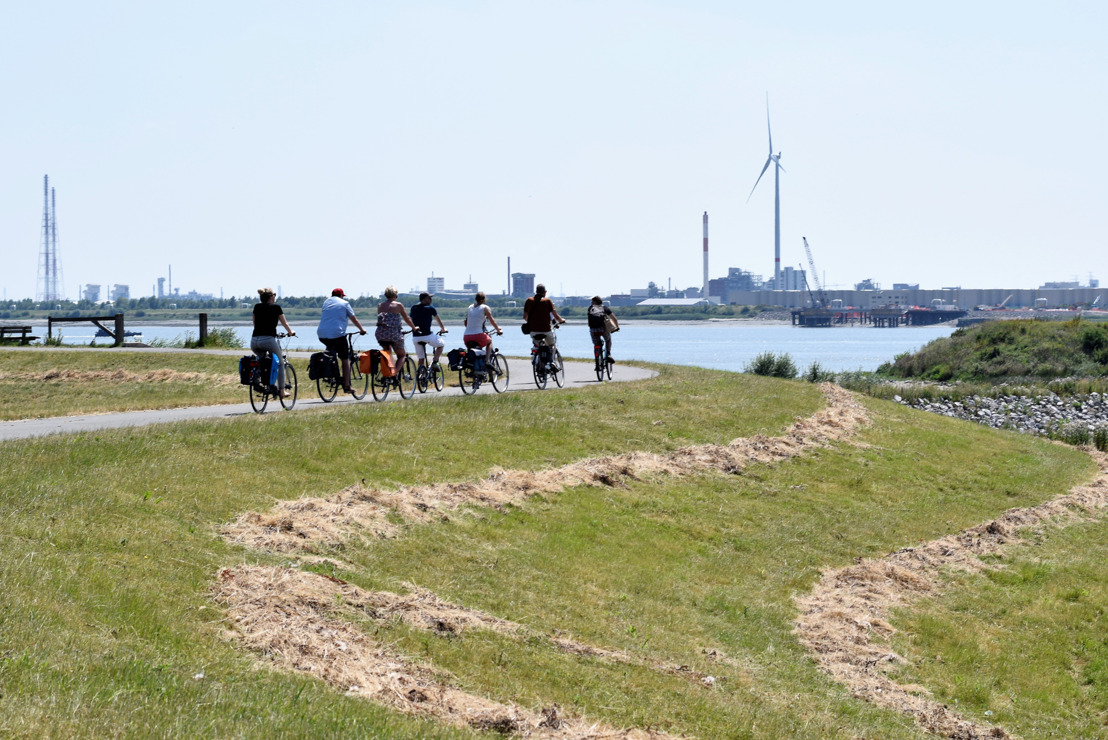 From 1 July, all the possibilities will be packaged together at www.havenland.be.

Havenland collects the initiatives from around 20 organisations working in and around the port of Antwerp. The visitor is central to it all: anyone who wants to have some fun in the port area. Whether that means spotting ships, getting a breath of fresh air in the sumptuous polder landscape, spotting rare birds, walking in one of the many scenic areas or cycling through the immense port infrastructure – it can all be done at Havenland.

Anyone looking for inspiration for a (day) trip can find it at the new website www.havenland.be from 1 July. A variety of stories and an activity calendar will stimulate people to head outdoors. Routes and participating partners can be identified on the premises by the Havenland label. This label guarantees that the participating initiatives offer sufficient quality. Along with the cycling and recreation map and the website, this is also the best way to navigate the gigantic harbour and plan your trip well.

“A great many authorities and private organisations are offering their own recreational and informative activities in and around the port area. With Havenland, we are aiming to draw attention to all these initiatives in a simple and easily accessible manner. As a world port, we have a great deal to offer,” explains Port Alderman Annick De Ridder. “This way, ‘Havenland’ can be the link between the port of Antwerp, the port community, those living in the surroundings and anyone wanting to come and relax or learn something new.”

“With Havenland, we're taking the opportunity to draw attention to the various aspects that go with living in and around a world port,” continues Boudewijn Vlegels, chairman of Maatschappij Linkerscheldeoever. “Alongside consideration for the economic aspect, the efforts we're making with various partners around nature conservation and the port area's rich history are addressed. We're also aiming to actively involve the local entrepreneurs who have some involvement with port life through Havenland.”

“When we receive groups at the Havencentrum, we notice that most visitors are in awe of the huge impact of this port on their own lives and the abundance of things to experience in and around the port. Havenland is our response to that. Our target group is not just young people during the Havenland Classes or other excursions, but anyone who's curious about all the goings-on at a port area like this,” concludes Ludwig Caluwé, regional council member for the Province of Antwerp and chairman of the Havencentrum.

Havenland is also calling upon any entrepreneurs with an idea to organise something in the port area themselves. They can let us know about that via the website.

It collects together all the recreational possibilities around the Port of Antwerp. All the information is available on the www.havenland.be website.

About this press release

A foretaste of what you can expect at Havenland

We selected four ready-made routes. All four are suitable for cyclists and often follow the network of bicycle paths for the provinces of East Flanders and Antwerp. Some of the routes can also be covered by foot. And to round off the contribution to that holiday feeling, all the routes can be reached from a DeWaterbus stop.

This route starts at the DeWaterbus stop in Zwijndrecht (near DEME), is around 18km long and has a clear emphasis on nature experiences. Birdwatching in the Rietveld Kallo? Enjoying the peace at the Lisdodde? From there, you can cycle through the port area, via the Kallo lock and the Ketenisseschor, all the way to Fort Liefkenshoek where this route ends.

Families with young children will get to know the work and history of the port on this short route of 2 to 3km in and around Lillo. Things you can visit there include the historic city centre, or the customs office from the popular Mega Mindy series.

Looking for an original day trip with your youth club? Then this is definitely the route for you! You can start at the MAS Port Pavilion. Then you'll be cycling towards the Port House, ’t Boomke, the graffiti on the dam wall all the way along the refineries to Lillo for a visit to the village of Lillo. You can return via DeWaterbus. If this cycling route isn't quite tough enough for you, there are 2 possible extensions: further to the north on the Right Bank, or brave the crossing and discover Fort Liefkenshoek on the Left Bank. Get some sun-tan lotion on those legs!

Route 4: Havenland for groups of friends

Feel like a hardy bike ride with some friends? Then try this route of around 34km. The start and end point is Fort Liefkenshoek. From here, you'll head into the polder area. Expect a trip with some magnificent panoramic views.

These four Havenland routes, and more inspiration for your visit to Havenland, can be found at www.havenland.be from 1 July. Follow Havenland on Facebook and Instagram too, for year-round inspiration.